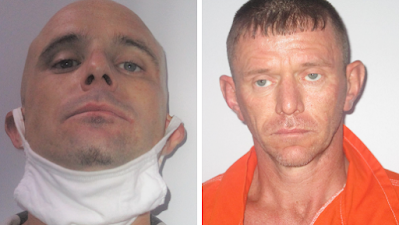 After having been released from jail earlier in the day on a theft charge, Danny A. Chain, Jr., a resident of Highway 16, was arrested again for possession of heroin and possession of methamphetamine. The current arrest is Chain’s eighth, beginning in 2015. Previous charges include eight counts of theft, two counts of possession of a stolen firearm, four counts of issuing worthless checks and several counts of failure to appear in court.

Shaun Travis Hobgood, 42, a resident of Highway 21 north of Bogalusa, was stopped by a detective when observed driving an off road all-terrain vehicle on the shoulder of Highway 21 in violation of Louisiana statutes. During the encounter, the detective discovered a quantity of heroin and methamphetamine along with drug paraphernalia in Hobgood’s possession. He was arrested and booked into the Washington Parish Jail on charges of possession of heroin, possession of methamphetamine, possession of drug paraphernalia and driving a prohibited vehicle on a highway.

“The use of illegal drugs is a road to disaster which never has a good ending,” stated Sheriff Randy Seal. “That first experiment with illegal drugs most often leads to a physical and psychological addiction that is very difficult to overcome. Far too many have succumbed to the addiction which usually leads either to prison or the cemetery. It is tragic to see young people come to our jail on drug charges, knowing that they are literally throwing away their future.”