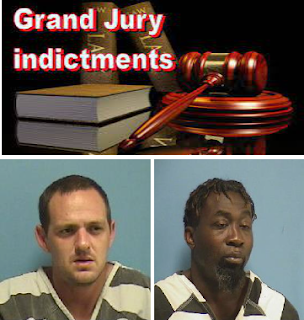 Christopher Aaron Burns, age 30 and  from Robert, was indicted for Second Degree Murder and possession of a Schedule II drug (Meth), both of which occurred on May 30, 2021. Shortly before 5:00 AM on Sunday, May 30th, STPSO deputies were dispatched to a reported shooting. The victim, Burns' cousin Matthew Cetrone (age 40), was transported to a local-area hospital where he died. The investigation revealed that, for unknown reasons, Burns exited the residence firing numerous rounds from a firearm. At some point, the victim went outside to investigate the sound of gunfire and was fatally wounded. Burns was arrested and booked into the St. Tammany Parish Jail. Angelica Lopez of the St. Tammany Sheriff’s Office investigated the case and Assistant District Attorney William Macke presented the case to the Grand Jury.

Arthur James White, age 45 and of Mandeville, was indicted for 1st Degree Rape of a victim over 65, which occurred on May 29, 2021. Detective Kathy Yevcinez of The St. Tammany Sheriff’s Office investigated the case and Assistant District Attorney Ysonde Boland presented the case to the Grand Jury.