Disturbance 1. The center of Tropical Depression Fred is currently located near the north coast of Cuba moving west-northwest at 10 mph. A turn toward the northwest is expected tonight or Saturday.  On the forecast track, Fred is expected to move along or just north of eastern and central Cuba through tonight, be near the Florida Keys on Saturday, and near the west coast of Florida on Sunday. Maximum sustained winds are currently near 35 mph. Slow strengthening is expected and Fred could become a tropical storm again later today. From today into Monday, heavy rainfall will be across southern and central Florida. From Sunday onward, the heavy rain and flood impacts could extend into the Southeast and into the Appalachians.

Disturbance 2. An area of low pressure, located about 850 miles east of the Lesser Antilles, is likely to become a tropical depression over the next day or two while moving toward the west or west-northwest at about 20 mph.  This system is expected to reach portions of the Leeward Islands Saturday night and then the Virgin Islands and Puerto Rico Sunday and Sunday night. Tropical storm watches or warnings could be required later today or tonight for portions of the Leeward Islands, the Virgin Islands, and Puerto Rico, since strong winds and heavy rainfall are likely to spread across those areas over the weekend. Formation chance through 48 hours is at 80% and formation chance through 5 days is at 80%. 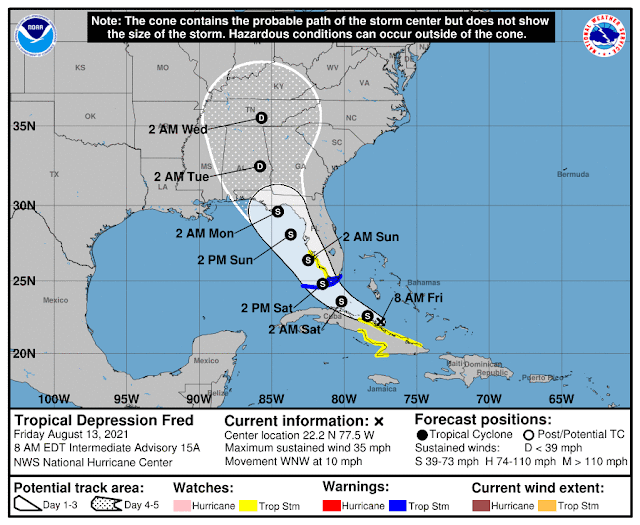 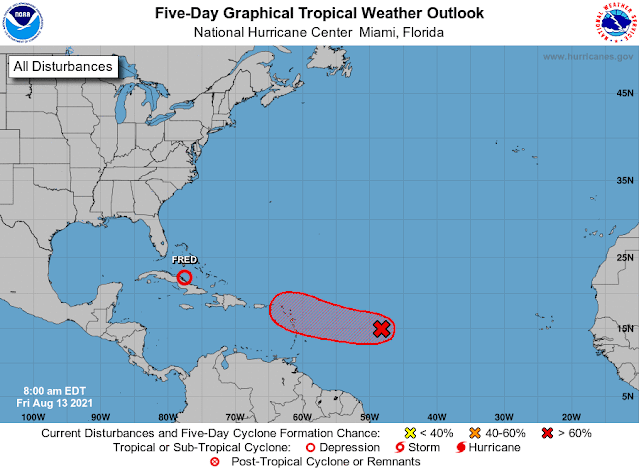