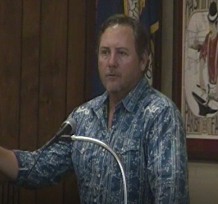 Franklinton Police Chief Justin D. Brown provided his monthly report to the Mayor and Board of Aldermen Tuesday (June 13, 2021) evening. The report included information on the recent drive-by shootings. See the video below.

“On the 9th day of July 2021, Officers with the Franklinton Police Department responded to 317 12th Ave in reference to shots being fired. Upon arrival, officers located several rifle casings and bullet holes in a residence.  Detectives were able to quickly obtain video surveillance from the incident and subsequently establish a vehicle description. Further review of the video surveillance shows an exchange of rifle fire from the occupants of the vehicle and an individual residing on 12th Avenue. No injuries were sustained during the gunfight.

A short time later, several 911 calls were received from the same area in reference to another shooting. Officers arrived and located a male suffering from a gunshot to the head.  The subject was transported to the hospital by Northshore EMS. Over the course of the investigation, detectives obtained actionable intelligence to identify a suspect in the shooting.  The victim was released from the hospital however he refused to cooperate with the investigation. Detectives are continuing the investigation and arrests are forthcoming.

On the 12th day of July 2021, Patrol Officers and Detectives observed the suspect vehicle from the first shooting at a local gas station. A traffic stop was conducted on the vehicle and three subjects were detained for questioning. Inside the vehicle, officers located a rifle consistent with evidence found at the shooting. Upon further investigation, all three subjects were found to be involved. Corroborating statements from the suspects concluded the actual shooter was currently being held in the Florida Parish Detention Center on an unrelated charge. A warrant was issued for his arrest and he was arrested on 07/13/2021 inside the detention center. Additional arrests are forthcoming.

Chief Justin Brown – “Unfortunately, we live in a society where the value of human life is deemed insignificant by some.  We have unsupervised juveniles carrying rifles and pistols, shooting at each other on our streets, selling drugs and no one seems to see anything. We first have to want better for our communities, then demand better from those around us to make a change. We all know where the problem lies and that problem starts at home.  Yes, it is often said it takes a village to raise a child but the village can’t or won’t do their part until the parents of these juveniles and young people step up and start parenting. I’ve told parents many times, you can love your children to death and by holding them up for wrongdoing, you’re doing exactly that; tragically, the rest of society must also face the consequences of your inaction.”

Starting immediately, the Franklinton Police Department will increase proactivity in enforcing town and state laws regarding curfew. Juveniles found to be in violation of the curfew laws will be detained and both child and parent will be issued a citation to appear in court.”