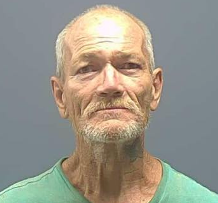 On July 13, 2021, TPSO detectives, along with agents from Louisiana Probation and Parole, responded to Ezell Mansfield Road in Folsom, attempting to locate Ard who was wanted for parole violation(s) and one count of Domestic Abuse Battery.

Chief Travis states that while on scene, detectives discovered Ard was cultivating marijuana on the property.

Ard was taken into custody and booked on the charges of Domestic Abuse Battery, Cultivation of Marijuana, and Parole Violation.