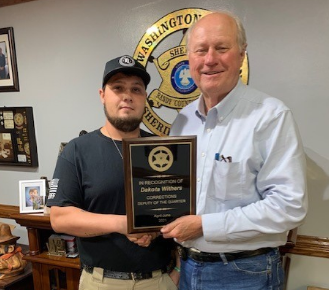 “Deputy Withers has shown extraordinary professionalism in the performance of his duties,” stated Sheriff Seal. “Recently, he was approached by an inmate with the promise of a sizeable amount of cash if he would bring drugs into the jail for him. Displaying significant personal integrity, Deputy Withers turned the tables on the inmate and his outside accomplices, resulting in arrests for the attempted crime. He did the right thing at the right time for the right reason. Washington Parish is blessed to have Deputy Withers as one of our protectors.”