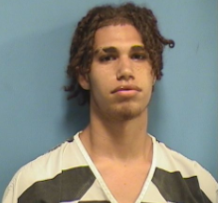 District Attorney Warren Montgomery reported today that on June 4, 2021, a St. Tammany Parish jury found Christopher Abbott, age 18 and of New Orleans, guilty of felony attempted home invasion. Abbott faces up to 15 years in prison when he is sentenced on July 8, 2021.

The victim dated the defendant off and on for about a year, in what became a volatile relationship. The defendant was given strong warnings by the victim’s parents, to stay away from the home and from the victim after two prior documented domestic violence incidents, including one where the defendant caused damage to her vehicle.

On the night prior and morning of December 19, 2020, the defendant sent numerous text messages to the victim filled with lewd, violent language and death threats. The victim did not respond. Later that morning, he was caught on a security camera at the exterior of the home, yelling obscenities. The defendant kicked in the front door and entered the home. The victim, her minor sister and a teen friend, were home alone. The victim phoned her parents, who called law enforcement as they rushed back home. The defendant was shouting and shoving the victim while the victim’s sister tried to stop him and the teen friend recorded the incident on her phone. The victim’s father was the first to enter the home and immediately took down the defendant and held him down until police came.

The prosecution used video and audio evidence from prior interventions from law enforcement to show a pattern of domestic violence perpetrated by the defendant.

In the state’s closing arguments, ADA Amanda Gritten replayed the recording from the incident and stated, “You just heard the sheer terror endured by the victims at the hands of the defendant, Christopher Abbott.” ADA Tiffany Dover said, “Even up to today the defendant has continued to victimize the victim by making her come in and testify after he’s taken no responsibility for his actions.”