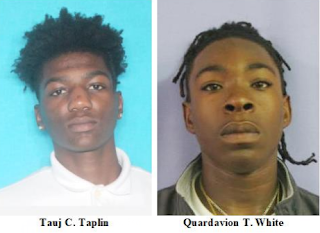 The Bogalusa Police Department has announced arrests in the murder of a Kentwood man that occurred in Bogalusa in the early morning hours of June 7, 2021. The BPD press release indicates the murder was gang-related and the investigation into the murder and apprehension of the suspects  was aided by multiple agencies.

The shooting death of Michael Brock, age 19 and of Kentwood, took place in the Sunset Acres (Union Pointe) Housing Complex in Bogalusa. BPD Detectives learned that Brock was affiliated with the Rap Group Faction “Three-13”, and was staying in Bogalusa with a relative of his girlfriend, due to him receiving death threats on social media, from a rival group of individuals in the Tangipahoa Parish area. According to neighbors, and those present in the housing complex, there was a knock at the door of the apartment where Brock was staying, and upon him answering the door, the shooter opened fire on Brock, using an AR-15 .223 Caliber Assault Rifle at point blank range. The shooter then fled, as a passenger, in a light colored sedan. There were other people present in the apartment, including a 7 year child who was in the same room with Brock during the hail of gunfire, but the child was not shot. Brock sustained multiple gunshot wounds, which resulted in his death. Others present were not able to offer any further details on the identity of the shooter.

Early in the investigation, having knowledge that the victim was from the Tangipahoa Parish area, and that the shooter was also likely from that area, detectives reached out to several agencies in that area for intelligence that could lead to the identity of the suspect and get-away driver in the murder.

With intelligence gathered from the ROCIC Intelligence Unit and from multiple outside agencies, along with surveillance video from the housing complex, within 24 hours of the shooting, Bogalusa Detectives had established the identity of the shooter and the get-away driver. Tauj Chardez Taplin, age 19 and of Kentwood, was identified as the shooter. Quardavion Tyvon White, age 19 and of McComb, was identified as the “get-away” driver. Taplin and White are both known to be affiliated with the rap group faction known as “The Fours”. White is also suspected of having ties to the Chicago Gang, the “Gangster Disciples”.

Warrants were sought and obtained for the arrest of Taplin and White.

On June 10, 2021, during the evening hours, Bogalusa Detectives were notified that the Chambers County Sheriff’s Office in Anahauc, Texas, east of Houston, Texas, was on a traffic stop with a silver and purple Nissan Maxima (believed to be the suspect vehicle), occupied by both perpetrators. A struggle took place between the deputies and the perpetrators, resulting in Taplin managing to escape and flee in the vehicle. White was taken into custody by Chambers County Deputies. Taplin led deputies and officers on a high speed pursuit east toward Beaumont, before the pursuit was called off due to Taplin endangering the lives of others in the pursuit. Taplin was later located in the Calcasieu Parish Area of Louisiana, near Lake Charles, La. and was apprehended by the Louisiana State Police. Both White and Taplin will face charges stemming from the struggle and pursuit in the Texas jurisdiction, as well as the Calcasieu Parish jurisdiction.

The administration of the Bogalusa Police Department would like to recognize the swift and thorough work of their Detectives Division for quickly identifying the perpetrators in the shooting, as well as the combined effort of all of the outside agencies for their contribution in the apprehension of these dangerous individuals.