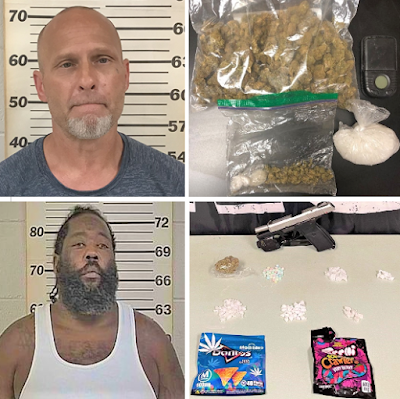 On Monday (May 17, 2021), Officers with the Pike County Sheriff’s Office responded to a call regarding drug activity on River Ridge Road. Upon their arrival, officers approached Eric “Rick” Bass and determined he had an active, felony arrest warrant. The Pike County Narcotics Division assisted in the search of the residence where approximately 90 grams of Methamphetamines were recovered. Approximately 141 grams of marijuana and drug paraphernalia were also recovered during the search. Bass was arrested on the active warrant and charged with Trafficking a Controlled Substance, Possession of a Controlled Substance with Intent to Distribute, and Drug Paraphernalia.

Also on Monday (May 17, 2021), Narcotics Agents with the Pike County Sheriff’s Office initiated a traffic stop on Tarpley St. in Osyka, Mississippi. The traffic stop led to the seizure of approximately 7.2 grams of marijuana, 10.2 grams of MDMA, 11.6 grams of methamphetamines, 8.9 grams of powder cocaine, 2.4 grams of crack cocaine, and 60.1 grams of THC edibles, along with drug paraphernalia and a stolen firearm out of Texas. Jeremy “Chubby” Dawson of Magnolia, Mississippi, was arrested and charged with Traffic Violations, Possession of Controlled Substance with Intent to Distribute x 6, Possession of a Stolen Firearm, Possession of a Firearm by a Convicted Felon, and Possession of Paraphernalia and transported to the Pike County Jail.