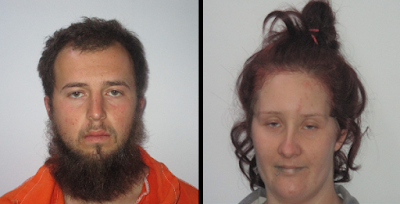 On April 28, 2021 while responding to a report of suspicious persons on Highway 21 north of  Angie, Washington Parish Sheriff’s Office deputies encountered a man standing in the middle of the highway and a woman leaning over an adjacent guard rail. When questioned by the deputies, the man and woman appeared to be under the influence of an unknown substance.

Both were searched and a small quantity of illegal drugs were discovered in Milton’s possession. Additionally, while one deputy detained the couple, the other deputy discovered Adams’ car partially submerged in a pond near the Mississippi state line. Both were arrested and transported to the Washington Parish Jail.

“At this time, jail is the best place for this pair in order for our detox program to address their health issues,” stated Sheriff Randy Seal. “While their offenses may seem minor, the mere fact they were on a major highway right of way presented a danger to the public. I am so pleased our deputies were able to respond quickly and prevent a possible tragic occurrence.”