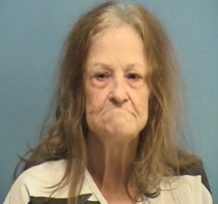 Sharon Lambert was booked into the St. Tammany Parish Jail on the above listed charges.  Bond was set at $100,000.00. Another individual, Dianne Hester (age 62) who also lived at the home at the time, was  determined to be equally responsible, but has since died.

“It is always a tragedy when a life is lost. I’m extremely pleased with the persistent work of my investigators who worked tirelessly on this case to ensure the responsible party has been arrested and will be held accountable,” Sheriff Randy Smith said.