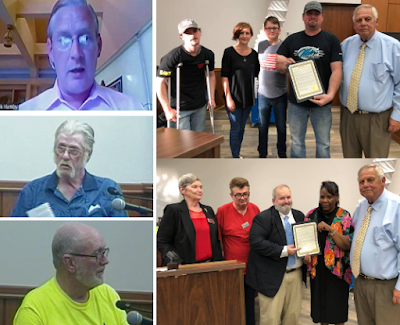 The Washington Parish Council met at 6:00 PM on April 26, 2021 and heard an update from Entergy, acted on six ordinances, introduced five ordinances, adopted two resolutions, heard concerns from the public, heard the President's Report (including the reading and presentation of two proclamations), and conducted a review of part of the Home Rule Charter.

Entergy Representative Patrick Hamby provided an update on the progress of noise abatement efforts at the power plant outside of Bogalusa. Questions were asked and comments made by members of the Council and by nearby resident Perry Mickenheim. (beginning at 3:05 into video of the meeting)

Six ordinances, previously introduced and Public Hearings having been held, were acted on (beginning at 12:25 into video of the meeting)

Five ordinances were introduced that will have Public Hearings and considered for approval at the next meeting on May 10, 2021. (beginning at 18:35 into video of the meeting)

Two resolutions were adopted (beginning at 20:35 into video of the meeting)

During Public Participation, resident Richard Berry addressed the Council regarding Riverside Medical Center's failure to accept People's Health Insurance. (beginning at 34:45 into video of the meeting)

Washington Parish President Richard Thomas presented his report (beginning at 38:30 into video of the meeting)