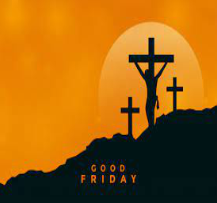 Soldiers, guided by Jesus' disciple Judas Iscariot, arrested Jesus in the Garden of Gethsemane. Jesus was then interrogated, and tried. Jesus was eventually brought to the Roman governor Pontius Pilate who eventually handed Jesus over to be crucified. Jesus carried his cross to the site of execution where he was crucified along with two criminals. Jesus agonized on the cross for six hours. During his last three hours on the cross, from noon to 3 pm, darkness fell over the whole land.  Upon his death, there was an earthquake, tombs broke open, and the curtain in the Temple was torn from top to bottom. The centurion on guard at the site of crucifixion declared, "Truly, this was God's Son!"

Having been declared dead, Jesus' body was buried. But at dawn on the first day of the week, . . .please read Matthew, chapter 28.