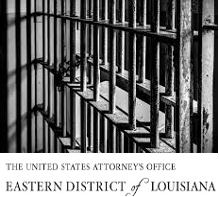 U.S. Attorney Duane A. Evans announced that Redis McGary, age 53 and a resident of Tangipahoa Parish, was sentenced on March 17, 2021 by United States District Judge Ivan L.R. Lemelle after previously pleading guilty to a two-count Bill of Information with possessing with the intent to distribute heroin and with being a convicted felon in possession of firearms.

McGary prevously pled guilty to charges of possession with the intent to distribute 100 grams or more of heroin and possession of a .38 special/357 Mag Derringer pistol and a .22 caliber Derringer pistol. McGary had also previously been convicted of a felony offense punishable by more than 1 year of imprisonment in the Tangipahoa Parish Criminal District Court.

Judge Lemelle sentenced McGary to 64 months of imprisonment and 4 years of supervised release.

The case was investigated by the U.S. Drug Enforcement Administration, the Tangipahoa Parish Sheriff’s Office, and the Hammond Police Department. Assistant United States Attorney Bayonle Osundare was in charge of the prosecution.