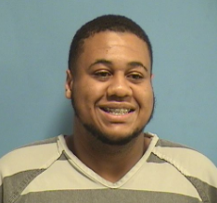 A Meraux man is back behind bars in St. Tammany Parish after an investigation following a routine traffic stop reveals more than 400 stolen/fraudulent checks valued at approximately $538,000.

Gregory Ward Jr., age 21 and of Meraux, was initially stopped by a St. Tammany Parish Sheriff’s deputy for speeding on January 25, 2021. Ward provided a fake name and was found to be in possession of several checks, credit cards, and debit cards that were suspected to be stolen, altered, and fraudulently manufactured. Detectives were able to identify one of the victims of the stolen/altered checks and Ward was arrested at that time on one count of Bank Fraud, 14 counts of Monetary Instrument Abuse, and two counts of Felony Illegal Possession of Stolen Things, in connection with the stolen altered checks connected to that one victim. He was booked into the St. Tammany Parish Jail but bonded out on February 2, 2021

However, the investigation into the more than 415 other stolen/altered checks continued. STPSO detectives learned Ward was stealing checks and altering those checks and also using the checks to create counterfeit checks before depositing the altered checks as well as the counterfeit checks into various bank accounts. During the January traffic stop, Ward was also in possession of check altering and check making items such as white out and blank check stock.

On Monday (March 29, 2021), Ward turned himself in and was booked into the St. Tammany Parish Jail. No bond has been set at this time.

“This is a prime example of how a well-trained deputy and criminal investigators have worked together to turn a minor traffic stop into a major criminal investigation,” Sheriff Randy Smith said. “I am extremely pleased with the hard work of all my personnel who worked tirelessly to further this investigation.”