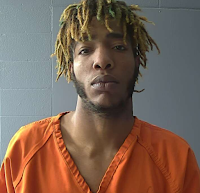 Crime Stoppers of Tangipahoa, Inc. reports that on Monday (March 22, 2021) evening, the Tangipahoa Parish Sheriff's Office initiated a traffic stop on a vehicle for several traffic offenses. The incident occurred off of Hwy. 38 on 9th Street in Kentwood.

When deputies made contact with the driver, 20-year-old Kentwood resident Zykeriean Bickham, they reportedly smelled the fresh odor of burnt marijuana from inside of the vehicle. Upon asking the driver if he had marijuana in his possession, he removed a clear plastic bag from his cup holder, then quickly placed the bag back in position. Consequently, a green leafy substance fell from the cupholder and landed on the center console.

At this time, Bickham was detained pending a roadside investigation. As a result, two pounds of synthetic marijuana was seized from Bickham’s vehicle.

Bickham was charged with possession with the intent to distribute CDS I, having the proper equipment required for a motor vehicle, no driver’s license, and for not using turn signals.