Suspects Wanted After Pursuit Into MS and Back to LA 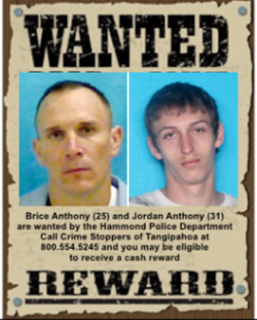 The Hammond Police Department attempted a traffic stop on University Avenue on January 27, 2021, at approximately 9:45 pm for traffic violations and suspected switched license plates. When the white Dodge Ram truck refused to stop, a pursuit began from Hammond to Pike County, Mississippi, and back to Louisiana. The truck crashed on East Cooper Road in Loranger, and the suspects fled the scene on foot.

After officers determined that the truck was stolen, they searched inside it and found the suspects’ personal items and a sawed-off shotgun. Arrest warrants have been issued for Brice Anthony, 25 years old of Amite, and Jordan Anthony, 31 years old of Hammond.

If anyone has any information on the whereabouts of the suspects, please contact the Hammond Police Department at 985-277-5701 or Crime Stoppers of Tangipahoa’s anonymous tip line at 1-800-554-5245. Be part of the solution and you may be eligible to receive a cash reward.