Mt. Hermon-area Man Back in Jail After 8 Days 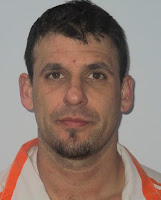 Only eight days after his release from the Washington Parish Jail, Ernest Joseph Lester, III (38) went back to jail today (February 25, 2021) on new charges. Lester, a resident of Mt. Pisgah Road in the Mt. Hermon area, entered a parish residence wearing no shirt and no pants while a woman and her children were inside waiting on her husband to return home from work. Lester harmed no one, but simply sat down on the couch and covered himself with a blanket.

After repeatedly telling Lester to leave, the woman called the Sheriff’s Office and Deputy Randall Garcia responded. Garcia arrested Lester and transported him to the Washington Parish Jail where he was booked on charges of unauthorized entry into an inhabited dwelling, criminal trespass and disturbing the peace.

“Obviously, this is a troubled young man,” stated Sheriff Randy Seal. “He needs help in a big way. Otherwise, I fear he is destined for a bleak future with even more arrests and more time behind bars. Thanks, Deputy Garcia, for responding so quickly and removing Lester from this residence.”