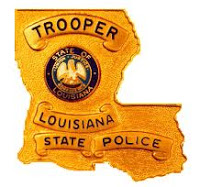 The initial investigation revealed that Dykes was traveling eastbound on LA 435 in a 2008 Toyota Tundra as he entered a left curve in the roadway. For reasons still under investigation, Dyke’s vehicle exited the roadway to the right where it impacted an embankment for a private driveway. The vehicle became airborne and impacted a utility pole.

Dykes was unrestrained during the crash and died on the scene due to injuries he sustained. Speed is suspected to be a factor leading to the crash and impairment is not suspected at this time. As part of the ongoing investigation, a blood sample was taken from Dykes for scientific analysis. The crash remains under investigation.

This is the sixth fatal crash Troop L has investigated since the beginning of 2021 and the fifth fatality that can be attributed to lack of restraint use. Louisiana State Troopers wish to remind motorists to always make good decisions while in a motor vehicle. Never drive while impaired, fatigued, or distracted, always ensure every occupant is properly restrained, and follow all traffic laws. While not all crashes are survivable, taking simple precautions such as these can often mean the difference between life and death.