Disturbance 1. Tropical Depression Omar is no threat to land masses. It is moving east, gradual weakening is forecast and it is expected to become a remnant low tonight and dissipate Saturday.

Disturbance 2. Tropical Storm Nana is no threat to the United States. Nana will continue to move inland over Guatemala and extreme southeastern Mexico today and tonight.. Rapid weakening is forecast today and tonight, and Nana will likely become a remnant low on Friday.

Disturbance 3. A broad area of low pressure located over the eastern tropical Atlantic several hundred miles west-southwest of the Cabo Verde Islands is expected to gradually develop early next week as the larger tropical wave located off of the coast of Africa passes to the north of the system on Sunday. Formation chance through 48 hours is at 20% and formation chance through 5 days is at 40%.

Disturbance 4. A tropical wave located off the coast of west Africa is merging with another disturbance located a couple of hundred miles south of the Cabo Verde Islands. Development of this system is likely to be slow during the next couple of days while it moves west-northwestward and a tropical depression is more likely to form early next week over the central tropical Atlantic. Formation chance through 48 hours is at 20% and formation chance through 5 days is at 70%.

Disturbance 5. Another tropical wave is forecast to move off the west coast of Africa over the weekend.  An area of low pressure is expected to form from the wave, and some development of this low will be possible early next week while it moves generally westward over the far eastern tropical Atlantic. Formation chance through 48 hours is at 0% and formation chance through 5 days is at 20%. 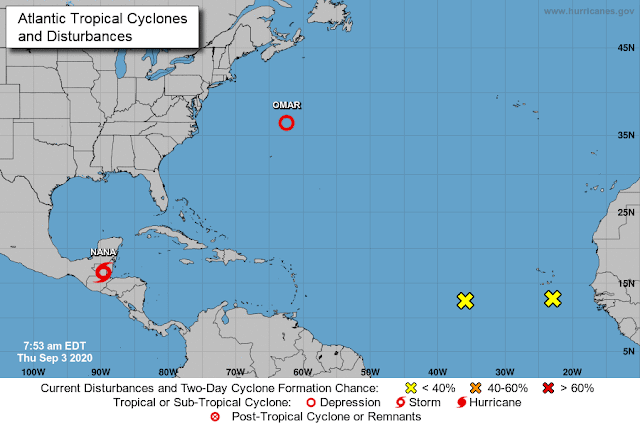