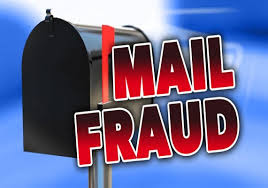 U.S. Attorney Peter G. Strasser announced that on September 19, 2020, William Lewis (41) and Jill
Lewis (40) of Slidell were charged in a two-count Indictment for conspiracy to commit mail fraud and mail fraud.

According to Court documents, beginning on or before January 31, 2014 through in or around January 2016, the defendants conspired to submit numerous false insurance claims for reimbursement to the United States Postal Service (“USPS”), causing the USPS to mail checks to William and Jill Lewis for approximately $42,000. For example, the two falsely claimed that they had sent expensive jewelry and other items through the mail and that the USPS lost the items. They also submitted forged invoices from retailers to the USPS to support the reimbursement amounts. The defendants also submitted a false claim to the USPS, representing that William Lewis purchased an Omega watch in the amount of approximately $4,999 and that the USPS lost the watch in the mail.

U.S. Attorney Peter G. Strasser praised the work of the United States Postal Service, Office of Inspector General, for its work in investigating this case. U.S. Attorney Strasser reiterated that the Indictment is merely a charge and that the guilt of the defendants must be proven beyond a reasonable doubt.

The case is being prosecuted by Assistant United States Attorney Sharan E. Lieberman.