Suspect in Custody for Shooting Last Week in Bogalusa 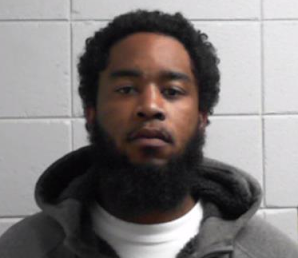 Bogalusa Police report the arrest of Damion Thompson, age 28 and of Bogalusa, for a shooting last week that resulted in one person dead and another wounded.

Bogalusa Police officers responded to shots fired last Thursday night (August 13, 2020) to the intersection of Austin Street and Coburn Street. Officers discovered that Marcus Tennison, a 35 year old Bogalusa resident had been shot, and he died on the scene as a result of his wounds. Another subject had been wounded and went to the hospital for treatment. His wounds were non life threatening.

On Tuesday afternoon (August 18, 2020), Detectives identified Thompson as a suspect in the shooting. Warrants for his arrest were obtained for Second Degree Murder, Possession of a Firearm by a Convicted Felon, Illegal Use of Weapons, and Aggravated Battery. Bogalusa Detectives, assisted by the Washington Parish Sheriff’s Office, began a search for Thompson. During the search, information was obtained that Thompson was in Hammond. Detectives began tracking Thompson’s movements and went to Hammond to attempt to locate him. While Detectives were en route, the Hammond Police Department was contacted with information on Thompson’s possible location. In less than an hour the Hammond Police Department’s Street Crimes Unit located Thompson, and he was taken into custody without incident. He will be returned to Bogalusa to be arrested on the aforementioned warrants.