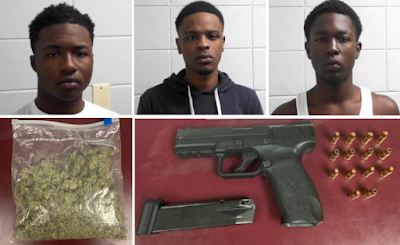 Criminal Patrol Officers responded to the Sunset Acres Housing Complex in reference to a call of subjects brandishing firearms. Upon arrival, Officers smelled a strong odor of marijuana coming from the apartment. Officers observed a subject attempting to leave the apartment through a window, who retreated when he saw officers. Officers eventually made entry and several subjects were detained, but were uncooperative.

A search warrant for the apartment was obtained and executed by patrol officers and detectives. During the search officers seized a total of 85 grams of marijuana, drug paraphernalia indicative of the use and sale of marijuana, two 9mm handguns, one with an obliterated serial number, and one with a 30 round magazine. Officers also recovered additional magazines, as well as handgun and rifle ammunition.

Quinn was charged with firearm free zone violation, illegal carrying of a weapon in the presence of a controlled dangerous substance, and possession of a firearm with an obliterated serial number.
at 6/13/2020 11:03:00 AM