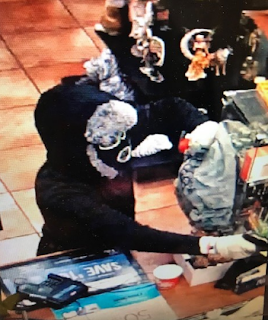 Tangipahoa Parish Sheriff Daniel Edwards is asking for the public's help in gathering information regarding an armed robbery that occurred last night (November 13, 2019) at the Big Boss Truck Stop on Highway 442, just outside of Tickfaw. TPSO Deputies discovered the incident when they stopped at the truck stop to purchase fuel.

About 1:00 a.m. this morning, as deputies entered the Big Boss Truck Stop parking lot, they observed the front door to be locked as a patron was attempting to enter the store. Deputies immediately cleared the area and secured the perimeter. Upon approaching the back side fo the building, they observed an open door and glass shattered on the floor throughout the store. While securing the inside of the building, deputies located the frightened cashier who was hiding in a locked office.

The preliminary investigation revealed that about 11:30 p.m., three unknown masked males armed with handguns executed a coordinated entry into the Big Boss Truck Stop. One of the males locked the front door as the others held the cashier at gunpoint. The armed masked men then ransacked the store, stole merchandise, and emptied the cash register. The cashier was forced to open the safe and the suspects got away with approximately $25,000 in additional cash.

During the incident, one of the gunmen fired a shot at the floor striking and destroying the cashier's cell phone that had fallen to the floor as two of the gunmen jumped over the sales counter. After taking all they could carry, the gunmen forced the cashier into the walk-in freezer and threatened to shoot him if he attempted to exit before they made their getaway. All of the suspects were wearing masks, hoods and gloves.

The cashier was not physically harmed as a result of this violent incident. Sheriff Edwards is asking anyone with information to please contact Crime Stoppers at 800.554.5245. TPSO Detective Michael D'Amato is the lead investigator on this case.