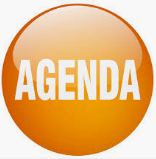 1. Call to Order.
2. Invocation and Pledge of Allegiance.
3. Roll call
4. Approval of the minutes held at the Bogalusa City Council Meeting on November 18, 2019.
5. Recognitions and Awards: None
6. Adoption of Resolutions:
A RESOLUTION authorizing the retaining of Robert A. Neilson CPA, to provide Professional Accounting Services for the City of Bogalusa as per Engagement Letter dated November 21, 2019. (Introduced by Councilwoman Graham).
A RESOLUTION authorizing Robert A. Neilson, CPA, to provide Professional Accounting Services for the LLA’s Statewide Agreed-Upon Procedures (SAUP’S), for the fiscal period ending December 31, 2019. (Introduced by Councilwoman Graham).
7. Introduction of Ordinances:
AN ORDINANCE approving and adopting the City of Bogalusa Operating Budget and Capital Budget for the Fiscal Year beginning January 1, 2020. (Introduced by Councilwoman Graham).
8. Public Hearings & Adoption of Ordinances:
AN ORDINANCE to approve the 2019 Revised Budget. (Introduced by Councilwoman Graham).
AN ORDINANCE to issue a special use permit to American Dream Homes of Washington Parish, LLC for construction of condominiums allowing three (3) to six (6) multi-family units per lot of property located at West 16th and Avenue I and H, specifically Block 28, Lots 1-40, and to provide for related matters. (Introduced by Fiscal Administrator Richard).
9. Public Participation
10. Administrative Remarks.
11. Other Council Discussion.
12. Announcements: Next Council Meeting will be held Tuesday, December 17, 2019 at 5:30 p.m.
13. Adjournment.

In accordance with the Americans with Disabilities Act, if you need special assistance, please contact Judy Gray at 985-732-6211 ext. 249 describing the assistance that is necessary.
As required by LA. R. S. 42:14, the City Council will allow a public comment period at any point in the meeting prior to action on an agenda item upon which a vote is to be taken.