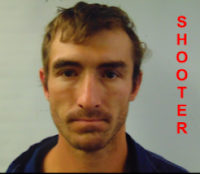 When Washington Parish Sheriff's Office deputies responded to a report of a man shot on May 11, deputies found a gunshot victim lying on the side of Highway 25 south of Franklinton.
Investigation revealed that the victim was from Louisville, Mississippi and was visiting at the residence of Wilson Glenn Rowell (age 33 and pictured here), who resides on Highway 25 South. As the victim was attempting to leave and secure a ride back to Mississippi, Rowell discovered that the victim had stolen a 9 mm pistol from Rowell’s residence and was attempting to hide the pistol in his luggage.
Rowell confronted the victim and the victim pointed the pistol at Rowell, his wife and his mother. Rowell retreated to his house, retrieved his shotgun and confronted the victim. After a brief standoff, the victim threw the pistol to the ground and started running away. Rowell then fired three shots at the victim, striking him twice.
The victim was transported to an area hospital. When he is released he will be arrested and charged with theft of a firearm and three counts of aggravated assault with a firearm.
Rowell was arrested and charged with aggravated battery and two outstanding warrants for contempt of court and failure to appear.
“Under Louisiana law, a person has the right of self-defense when life threatening situations occur,” stated Sheriff Randy Seal, “but Mr. Rowell made a serious error in judgment when he shot the victim after the threat had ended and the victim was fleeing. I appreciate the fine work of our officers in this matter.”
at 5/17/2017 05:19:00 PM