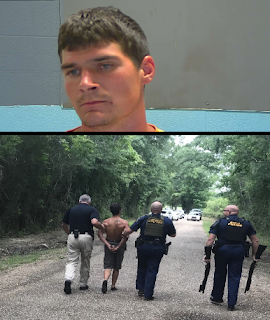 The Tangipahoa Parish Sheriff’s Office (TPSO) responded to a residence on Hwy. 1054 near Kentwood on Monday (May 29, 2017) at 11:23 am. The complainant stated that Bryan Menard (26) of Kentwood had threatened family members with two loaded shotguns before leaving the scene. Family members advised that Menard burglarized a neighboring residence and stole a 30-06 rifle before coming to his grandparent’s home on Hwy. 1054. Menard surprised the family when he emerged from underneath the house where he crawled his way from the back to the front where everyone was gathered. Menard then held the family members at gunpoint and instructed one of them to enter the residence and retrieve his grandfather’s two shotguns and ammunition. Menard threatened to shoot someone if his demands were not met. Menard fled, now armed with two loaded shotguns, leaving the stolen rifle behind.
A short time later, Tangipahoa Parish 911 received communication from an unknown female on Hayden Road stating she was being held against her will inside of her vehicle. Details later revealed that the female was being held at gunpoint by Bryan Menard. Deputies immediately responded to Hayden Road where they located the female and Menard. Menard allowed the woman to exit the vehicle as he assumed a tactical position, armed with a shotgun aimed at deputies. Deputies gave numerous loud verbal commands for Menard to put down his weapon, which he refused to do and fired several shots at deputies. Fragments from the shotgun blast struck one deputy in the arm, another in the head, and one K-9 in the face resulting in minor injuries. Deputies returned fire at Menard as he fired several more times before fleeing in the wooded area.

Within fifteen minutes, several agencies arrived to assist. They included U.S. Customs and Border Patrol (provided air support), the Kentwood Police Department, Louisiana State Police, Independence Police Department, and Roseland Police Department. A tight perimeter was maintained and the Wilmer Volunteer Fire Department provided traffic control and assisted in making contact with residents in the area. With the support of these agencies, a short time later, Menard was located and taken into custody without further incident.

It was learned from the female kidnapping victim that Menard, armed with two shotguns, told the female to drive while he consumed methamphetamine. Menard threatened the hostage with death if she refused to comply. The female victim drove Menard around the Wilmer and Kentwood area. The female was able to text 911,  identify who was holding her captive and provided updated locations as she remained fearful not knowing if her texts to 911 were successful.  The victim reported that Menard warned her he would use her as a “human shield” if approached by law enforcement.

Menard was interviewed and stated he was wanted by probation and parole. Menard further stated he had been ingesting methamphetamine before and during his crime spree. Menard, a convicted felon, chose to arm himself with two shotguns fearing someone was going to harm him. He admitted to threatening to kill the female while she drove him around aimlessly without particular direction. Menard said when he saw deputies arriving, he knew that he didn’t want to go back to jail so he felt firing at deputies before fleeing into the woods was his only option. Menard said, after he fled into the woods, he prepared for war by reloading his firearm as he waited for deputies to approach.  Menard continued in his statement that he got tired of waiting, so he walked into an open field where he was ordered to surrender.   Upon his capture, Menard was found to be in possession of methamphetamine and one shotgun.

This investigation is ongoing. However, at this time, Menard is being charged with Aggravated Burglary, Armed Robbery, Second Degree Kidnapping, False Imprisonment, Convicted Felon in Possession of a Firearm, Possession of CDS II, 3cts of Attempted First Degree Murder on a Police Officer, 1ct of Injuring or Harming a Police Dog, Probation Violation, and Failure to Appear.
at 5/31/2017 05:01:00 PM