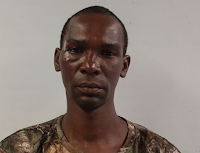 During an appearance late in the afternoon on December 16 before a 22nd Judicial District Judge, Brenzel Warren, age 42, was ordered to jail. While being escorted to the jail, Warren was able to break loose and flee. A manhunt ensued in the Franklinton area but Warren could not be located. It was suspected that someone picked him up.
On December 20, Washington Parish Sheriff's Office detectives received information that Warren was hiding in a house on Monroe Street in Bogalusa. Detectives and deputies went to the location and surrounded the house. Warren then surrendered without incident and was transported to the Washington Parish Jail. No bond has been set for him at this time.
Sheriff Randy Seal commented on Warren's poor decision to flee. "All he did was to earn an escape charge that is certain to give him more time in jail. It was a poor decision on his part, but he is a grown man and will have to suffer the consequences of his own behavior. I am pleased that our officers were able to locate and arrest him without harm to anyone."
at 12/28/2016 11:24:00 AM