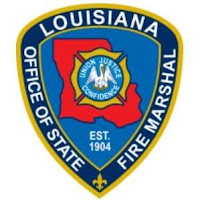 State Fire Marshal Chief H. “Butch” Browning is announcing the agency’s 2020 performance outcomes which show, despite the operational limitations of the pandemic, taking on the new and fluid task of Covid-19 enforcement efforts and responding to multiple tropical system threats, that the agency maintained its productivity goals and remained resilient throughout the year.

“The hurdles this agency has jumped over this past year have been numerous and daunting, but I am so proud of how each section of the State Fire Marshal’s Office not only responded, but thrived, in what otherwise has been an incredibly strenuous year for so many agencies, businesses and families,” said Browning.

In 2020, deputies conducted around 35,000 final inspections of new commercial buildings opening across the state as well as compliance inspections of existing commercial buildings. In addition, deputies inspected hundreds of fireworks stands and displays and responded to thousands of impairment reports on life safety and property protection systems in commercial businesses. On top of those regular duties, deputies conducted COVID-19 compliance visits and complaint responses starting in May when Gov. John Bel Edwards moved the state from the Stay At Home order into Phase 1 of the “Roadmap to a Resilient Louisiana” plan. That effort rendered more than 16,000 inspections by the year’s end, more than 12,000 of which were conducted by members of the State Fire Marshal’s Office alone. And that effort continues still today.

SFM deputies were requested to investigate almost 700 fire incidents. Of those fires, fewer than 300 were classified as incendiary, on par with the last two years’ figures. The agency’s arrest rate remains in the 40% range for a third year, more than double the national average. Unfortunately, there were just as many lives lost this year to residential fires than the previous year, roughly 77. Only about a dozen of those cases involved structures with working smoke alarms at the time of the fires.

The agency’s Plan Review division saw a slight decrease in the number of new construction project submittals in 2020, totaling more than 15,600. However, there was a slight increase in the estimated total value amounting to more than $9.8 billion.

In addition, the SFM licensed more than 6,400 individuals and nearly 1,300 firms in 2020, bringing in around $1.7 million in revenue. Those licenses apply to a host of industries including life safety & property protection businesses, amusement ride operators, conveyance devices, firework permits and boiler systems.

Lastly, the agency’s Emergency Services division, with the Louisiana Urban Search and Rescue Task Force at the center, stayed in response mode for much of the hurricane season as the state found itself preparing for six tropical threats. Three of those-- Laura, Delta and Zeta-- resulted in deployment missions for a variety of needs including water rescue, evacuation and tens of thousands of building damage assessments.

“This past year has been one for the record books for all of us,” said Browning, “But I’m glad to say, for the State Fire Marshal’s Office, it’ll be a year we’ll be able to look back on with pride.”