UPDATE: Two boaters located Ted Roach and Jennifer Lingoni at approximately 1:30 p.m. Monday. They were found sitting on the porch of a camp near Bayou Lacombe and were brought to a nearby boat launch, where they were checked by medical personnel and found to be in good condition.

Roach and Lingoni told deputies their boat sunk in the Rigolets Sunday afternoon, and they spent Sunday afternoon and Sunday night clinging to one life jacket before they made it to shore at Goose Point sometime Monday morning. They then swam across a marsh area and sought refuge at the camp until they were located. 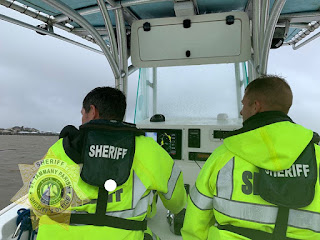 The STPSO was notified shortly after 3 p.m. Sunday, as Tropical Storm Cristobal was approaching the Louisiana coastline, that the two boaters had not returned as planned.

The STPSO Marine Division, assisted by U.S. Coast Guard and Louisiana Department of Wildlife and Fisheries personnel, searched until dark on Sunday. The conditions on the lake became too dangerous  and the search was suspended until this morning. The Coast Guard helicopter searched through the night with no sight of the vessel and STPSO Marine units resumed their search at first light on Monday morning.