WPSO Arrests Man Who Ordered Homeowner to Leave His Own House

On Wednesday (May 13, 2020), a Washington Parish homeowner west of Franklinton was surprised 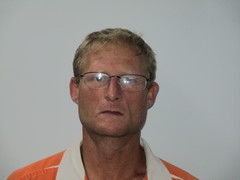 when an unknown man holding an instrument in his hand walked through his front door and ordered the resident to leave his own house. The startled resident responded by ordering the man to leave. The intruder then left and began walking through neighborhood yards.

Washington Parish Sheriff’s Office Sergeant Mike Thomas responded to the residence and then began a search of the area for a man fitting the description provided by the homeowner. He located the man, identified as Kevin Don Burch, age 40 and a resident of Highway 440. Burch, barefoot and wearing a tank top and shorts, was holding an electric toothbrush, a pack of cigarettes and a piece of a shrub.

Sgt. Thomas placed Burch under arrest after confirming he was the intruder and had outstanding warrants for domestic abuse. He was booked into the Washington Parish Jail charged with unauthorized entry into an inhabited dwelling, domestic abuse strangulation and domestic abuse child endangerment.

“What a shock it must have been for the homeowner to have a stranger walk into his house and order him to leave,” stated Sheriff Randy Seal. “I’m grateful no one was injured and I appreciate Sgt. Thomas’ quick response and apprehension of the intruder.”
at 5/14/2020 04:01:00 PM