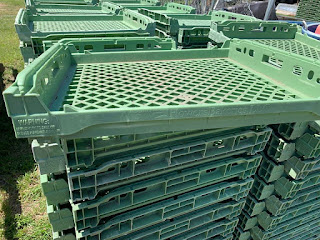 On May 12, 2020, Detectives Matthew Dean and Jason Garbo began investigating suspicious activity involving the sale of a large quantity of bread trays being sold for $5.00 from a location off of Highway 16 in Amite. The investigation led detectives in recovering 394 bread trays that were stolen from the Flowers Baking Company and 4 from Mid South Bakery. The value of these trays totals approximately $2,786.00.

In 2016 in Miami-Dade County, twenty people were arrested after $1.5 million worth of plastic crates were stolen from a local manufacturer. These crates were sold to recycling centers and ground up. While conducting the arrests, investigators found 2,900 milk crates at one facility, in addition to bags filled with an estimated $30,000 worth of shredded plastic.

This case originated when a private investigator contacted TPSO after being hired by a manufacturer to track down their stolen property.