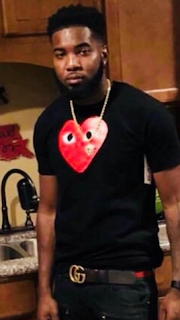 The Bogalusa Police Department, in a coordinated effort with surrounding agencies, is currently conducting an investigation into a Missing Person from the Bogalusa Area.

29-Year-Old Dominique Audrell James, African American Male, was last seen in Bogalusa on Saturday (May 2, 2020), around Noon, and has not been seen or heard from since. James was traveling in a 2012 GMC Yukon Denali, White in Color, towing a 5 X 8 lift gate utility trailer. James was believed to have been heading to an unknown location to pick up a four wheeler.

Detectives with the Bogalusa Police Department are asking for any assistance from the public, in locating James or his vehicle. If you have any knowledge of the whereabouts of Dominique James, or if you know where the vehicle may be, you may remain anonymous and contact the BPD at 985-732-6238, or you may contact Crimestoppers at 504-822-8111.
at 5/06/2020 11:20:00 AM