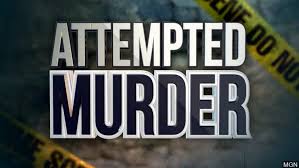 Anthony Peoples, a 29 year old Bogalusa resident, was arrested and charged in the Attempted Murder of Brandon Williams (age 20 and of Bogalusa), that occurred on April 19, 2020.

The Bogalusa Police Department, in a joint investigation with the Washington Parish Sheriff’s Office, was able to tie two shootings to a Pleasant Hill residence, where 35 year old Shawn Whiteside resided. On the night of April 19, 2020, Joseph Peoples, was identified and implicated by the victim and witnesses, in the attempted murder of 20 year old Brandon C. Williams. The shooting occurred at the residence of Shawn Whiteside.

On the morning of April 22, 2020, Joseph Peoples was identified and implicated by a witness, as the person responsible for the shooting death of 35 year Shawn Whiteside. That shooting occurred just blocks from Whiteside’s residence. Joseph Peoples later reportedly confessed to shooting Whiteside.

Captain David Miller also stated that "Quick response and excellent teamwork between the BPD and the WPSO Detectives resulted in the closure of two high profile cases within a single day."