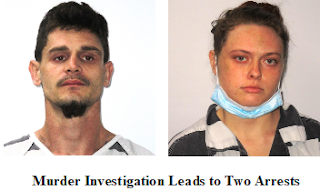 Gregorio responded to a report of a body on the side of Highway 1072 at the entrance to a rural hunting club. Deputy Gregorio discovered a deceased male, later identified as Shawn Gregory Whiteside (34), a resident of Bogalusa. Detectives were notified and they began the murder investigation.

Armed with information from the motorist who discovered the body, detectives began a search for a described vehicle which was seen speeding away from the scene. After a thorough search, detectives located the vehicle on Denham Avenue in Bogalusa. Detectives also were able to determine that Whiteside’s last known location was at the same Denham Avenue address. Occupants of the house were questioned and reportedly admitted to the murder. They reportedly stated Whiteside was riding with them when a verbal argument began and Whiteside was shot by the driver, then driven to the rural area and dropped off.

Arrested and charged with second degree murder was Joseph Anthony Peoples (29), a resident of 814 Denham Avenue. Peoples' companion, Allison Cook, age 18 and a resident of Highway 62 was also arrested and charged with being an accessory after the fact and obstruction of justice. Both were transported to the Washington Parish Jail. The bond for Peoples has been set at $750,000. Cook’s bond is $15,000.

While this is Cook’s first stay in the Washington Parish Jail, Peoples has been arrested previously. Arrests in 2013 were for traffic offenses and possession of stolen property. Early in 2016, he was arrested for burglary, obstruction of justice and illegal use of a weapon. A later 2016 arrest was for armed robbery. In 2017 he was arrested again for burglary and for being a convicted felon in possession of a firearm.

Sheriff Randy Seal commented. “This murder was solved quickly due to the hard work of our detectives and Bogalusa Police Department detectives. Both agencies worked hand-in-hand to identify the victim and locate the shooter. I am grateful to Chief Kendall Bullen and all of his officers for their wonderful partnership with the Sheriff’s Office. I am thankful also that this murder has been solved and the shooter is behind bars.”
at 4/23/2020 11:17:00 AM