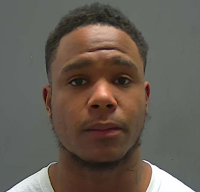 The State Fire Marshall's Office announced today the arrest on Tuesday (January 14, 2020) of Mark “Tookie” Lee (18) of Ponchatoula. Lee was wanted in connection with the intentionally set fire of a manufactured home in Hammond on October 14, 2019, which threatened several other occupied trailers.

Hammond Fire Department responded to the fire call in the 43000 block of Baham Lane. The State Fire Marshall's Office was contacted for assistance in the investigation after firefighters learned new information about the case suggesting it was suspicious in nature.

Video evidence and witness statements led to the identification of Lee as the individual who set the trailer on fire. Lee, who had been difficult to locate since the fire, was taken into custody by Hammond Police who arrested him on unrelated charges prior to his booking on the State Fire Marshal’s outstanding warrant for Aggravated Arson.

The State Fire Marshal’s Office would like to thank the public as well as Hammond Police and Hammond Fire for their assistance with this case.
at 1/15/2020 04:48:00 PM