Jennifer Abelseth, who has been sought by the Washington Parish Sheriff’s Office, was captured 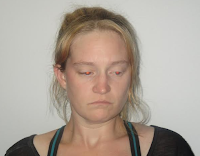 She faces additional charges in Tangipahoa Parish and remains in the Tangipahoa Parish Jail this morning awaiting transfer to Washington Parish where she faces four counts of simple kidnapping. Her husband, Joshua Michael Abelseth (33) was captured November 8, 2019 and remains in the Washington Parish Jail also charged with four counts of simple kidnapping.

“Thanks to the hard work and diligence of our investigators,” stated Sheriff Randy Seal, “this case was resolved in just a few days. The children are safe at home with their custodial grandparents and the kidnappers are in jail. That is a good outcome. I am grateful not only to our investigators but also to the Tangipahoa Parish Sheriff’s Office, other law enforcement agencies and the media outlets who were quick to disseminate all information about this unfortunate event.”