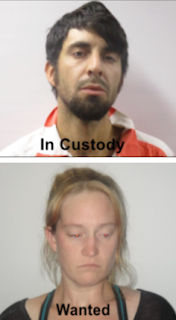 Last night (November 8, 2019), the Washington Parish Sheriff’s Office located and arrested Joshua Michael Abelseth (33), who was being sought on four counts of simple kidnapping which occurred earlier this week. Jennifer Abelseth, a second suspect, remains a fugitive and her location is unknown. It is believed that she may be in Alabama, either in the Hoover or Tuscaloosa area or perhaps in the Mobile area, although she could be anywhere, according to the WPSO report. Washington Parish Sheriff’s Office investigators, with the assistance of the FBI, are searching for her and are optimistic that she will be located. Abelseth’s options are reportedly limited since she has no vehicle and is believed to have no money.

The four children (identified as Alyssa Weathers, Noah Weathers, Cayden Abelseth and Lili Abelseth) were returned by Abelseth to the children's grandparents house in Washington Parish.

WPSO investigators had learned that Abelseth was back in Washington Parish and likely would take the children back to their grandparents’ house. WPSO detectives, patrol deputies and drug task force officers set up surveillance in the vicinity, spotted Abelseth drive up to the house, and saw him take the children inside. Once Abelseth drove away, officers made a traffic stop, arrested him and transported him to the Washington Parish Jail where he is being held on the simple kidnapping charges.

Joshua Abelseth and Jennifer Abelseth, who lost custody of their children through court order, took the children from their grandparents’ home in Washington Parish and were believed to have fled the state.

“Great arrest,” stated Sheriff Randy Seal. “Our investigators have been working on this non-stop and I am so pleased the children are back home and safe. Joshua Michael Abelseth is in jail where he belongs and I am confident that Jennifer Abelseth will be able to join him as soon as we locate her. Sooner or later, we will locate her, arrest her and put her in jail. Jennifer, if you are reading this, call us and let us know where you are. Make it easy on yourself.”