Shortly after 4:00 a.m. on the morning of October 15, Washington Parish Sheriff’s Office Patrol 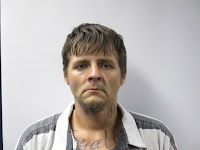 Deputy Mike Thomas responded to a report of a single vehicle wreck on Highway 10 in the Stony Point in the western part of the parish. Upon arriving at the scene, he encountered a sports utility vehicle backed into a small opening off of the highway. The driver of the vehicle, Michael A. Ellis (30), a resident of Hodges Road, was not injured; however, Deputy Thomas determined that Ellis had no driver’s license, no insurance on the vehicle and was driving with an expired license tag. In addition, Ellis was in possession of drug paraphernalia.

Ellis was arrested and transported to the Washington Parish Jail charged with contempt of court and possession of drug paraphernalia, along with the traffic offenses.

Sheriff Randy Seal commented. “One can only wonder what this fellow was doing in that location at that time of the day. We will never know what crime or crimes Deputy Thomas may have prevented by his decisive action in this matter. I appreciate all that he did.”