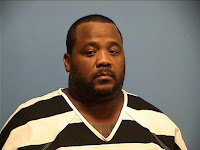 defend himself against an armed man and his accomplice who showed up at his Slidell-area home attempting to take his child.

Sometime after 1 a.m. Thursday (October 24, 2017) Hakim Dumas (40) got into a verbal altercation with his live-in girlfriend. The girlfriend left the residence and relocated to a family member’s house but left her child, who was in bed sleeping. About two hours later, an armed man and a friend showed up at Dumas’ residence in the 1900 block of King’s Row in Slidell. The two men confronted Dumas at his front door with the intent take the child.

Dumas produced his own firearm and fired upon the men, fatally striking one and causing a non-life threatening graze wound to the other’s shoulder area. The injured man, Billy Porche (24) of Harvey, fled the residence and was located nearby by St. Tammany Parish Sheriff’s deputies a short time later. Neither Porche nor the deceased had permission to take the child from the residence.

Porche was arrested on the charges of Attempted Aggravated Kidnapping of a Child (felony) and Second Degree Murder (felony), as his actions directly resulted in the death of the second individual. Dumas was also arrested on the charge of Possession of firearm by person convicted of certain felonies (felony) and Possession of or dealing in firearms with obliterated number or mark (felony). Dumas was determined to have acted in self-defense and was not charged in connection with the homicide.

The remains of the deceased have been turned over to the St. Tammany Parish Coroner’s Office, who will make an identification of the man and a determination of cause and manner of death.

The investigation is ongoing, and no additional information is available at this time.