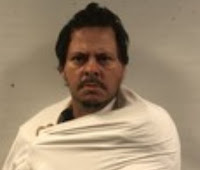 Hunt (43) of Franklinton, guilty as charged Wednesday (October 23, 2019) of aggravated incest and molestation. He is scheduled for sentencing by District Judge Peter Garcia on December 5, 2019 and faces 25 to 99 years in prison on the aggravated incest charge for a victim under 13 and five to 40 years for molestation.

The victim disclosed to a high school counselor in 2017 that Hunt had been sexually abusing her since she was 8 years old. The victim had reported the sexual abuse to other adults previously, but they refused to believe her. Hunt also had been physically abusive to the victim and threatened to harm her. The victim ultimately was able to receive counseling and support from a family member and the Children’s Advocacy Center – Hope House.

The victim testified during the three-day trial, and the jury deliberated about 2½ hours before finding Hunt guilty.

After Hunt’s arrest, another victim came forward and accused Hunt of sexually abusing her when she was 12 years old. The second victim, who is now an adult, also testified this week during Hunt’s trial.