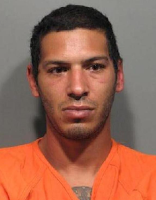 of Slidell guilty Thursday (September 26, 2019) of second degree murder, distribution of heroin, possession with the intent to distribute heroin and possession of Suboxone. Laue faces mandatory life imprisonment when he is sentenced October 9, 2019 by District Judge Martin Coady.

On August 25, 2015, officers responded to the scene of a drug overdose in Slidell and discovered that Albert Morant (24) had died of a heroin overdose. An investigation by the Slidell Police Department determined that Morant had purchased the heroin from Laue and that Laue was dealing heroin in his neighborhood with regularity. Laue admitted to being a middle man, making trips to New Orleans to provide heroin for his customers in Slidell.

Morant’s family members were present for the duration of the week-long trial and were pleased with the verdict. They said they hope the awareness of this case can save the life of another person who is struggling with an addiction and also serve as a warning for drug dealers who exploit and profit from those addicted to heroin.

The case was investigated by the Slidell Police Department’s Narcotics Division and was prosecuted by Assistant District Attorneys Holly McGinness and Michael Cochran.