Help TPSO Locate the Driver of This SUV 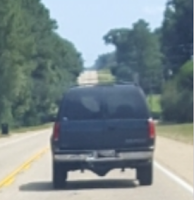 owner/driver of this dark-colored SUV.

Yesterday morning (September 18, 2019), a caller advised that while returning home from an outing, an unknown white male driving a green-colored SUV pulling a utility trailer loaded with a tractor was pulling away from their driveway. The complainant followed the green SUV to the intersection of Hwy. 1054 and Hwy 16 where contact was made with the driver.

The driver, described as a white male in his 30’s, medium build, with blonde hair, then unhooked the loaded trailer from the SUV and fled eastbound on HWY 16.

Detectives are asking anyone who may have information about this case to please call Crime Stoppers at 800.554.5245. TPSO Lt. Blane Sanders is the lead investigator.