WPSO: Arrests Made in Arson With Intent to Defraud Case 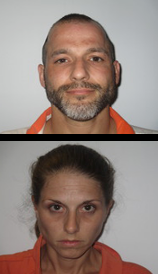 Early in the morning of July 31, 2019, a motorist on Highway 1072 and Carter Road called the Washington Parish Sheriff’s Office to report a vehicle fire. Fire District #7 firefighters responded to the scene and extinguished the fire which completely destroyed the vehicle. Patrol Deputy Mitchell Nesmith arrived at the scene and was unable to positively identify the hot and smoldering vehicle, except to note that it likely was a Toyota product. No persons were in or around the vehicle which was towed from the scene by a local wrecker service.

Later that day, the Sheriff’s Office received a call from a motel south of Bogalusa that a vehicle had been stolen from that location. Patrol Sergeant Jay Dupre responded and noted that the stolen vehicle was the same make as the vehicle which was burned earlier
.
Sergeant Dupre interacted with Detective Kody Glenn due to the suspicious nature of both the fire and reported theft and then was able to match the vehicle identification number of the reported stolen vehicle to the vehicle identification number of the burned vehicle. Noting that the same vehicle was involved in both incidents, Detective Glenn went to the motel to interview the two persons who reported the vehicle theft.

In a taped interview at his Bogalusa office, Detective Glenn obtained a full confession from both persons in regards to intentionally burning the vehicle, then reporting it stolen and filing a fraudulent insurance claim. In addition, it was discovered that each was in possession of illegal drugs. Both persons then were arrested and transported to the Washington Parish Jail in Franklinton.

“In this case, alert patrol deputies and detectives were able to link the two incidents, solve the crime and arrest both guilty parties, all within a few hours,” stated Sheriff Randy Seal. “That is good law enforcement work. Such fraudulent claims are one of the reasons honest citizens must pay more for insuring their vehicles. This is one fraudulent claim that was not successful. I applaud Deputy Nesmith, Sgt. Dupre and Detective Glenn for their diligence in quickly bringing justice to the two thieves.”