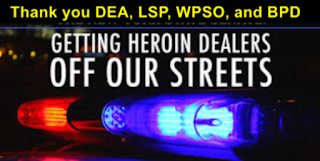 Larry Davis (40), both from Washington Parish pled guilty to heroin and gun charges. Both Davis and Miller pled guilty to conspiring to distribute 100 grams or more of heroin, and to being felons in possession of a firearm. Miller also pled guilty to possessing a firearm in furtherance of drug trafficking.

Court records indicate that Miller sold heroin in the Bogalusa area on a daily basis. Several controlled buys of heroin was made from Miller. Interceptions of Miller's telephone confirmed Miller's heroin distribution activities and that his supplier was Larry Davis. Read more of the investigation and phone conversations here and here .