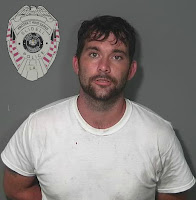 motorcyclist after observing him drive reckless while fleeing from a local Walmart. The motorcyclist, identified as 27-year-old Charles Mizell of Slidell, refused to stop and lead officers on a chase.

Mizell tried to flee on I-10 but crashed his motorcycle in a ditch near Old Spanish Trail. After the crash, Mizell climbed into a large storm drain which ran underneath I-10, but ultimately got stuck. It took nearly two hours for officers to rescue Mizell from the drainage pipe.

Mizell was eventually taken into custody and transported to a nearby hospital due to injuries sustained during the crash, and by him being stuck in the storm drain.

Mizell was booked into the Slidell City Jail on the charges of Aggravated Flight from an Officer, Aggravated Obstruction of a Highway, Driving Under Suspension, Reckless Operation, and No Insurance.

It is suspected that Mizell was shoplifting from Walmart, but that is still under investigation at this time. More charges may be filed at a later date.