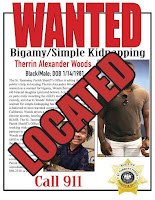 Therrin Alexander Woods (38), wanted by the St. Tammany Parish Sheriff's Office on warrants charging him with Bigamy and Kidnapping, was taken into custody by the Buena Park Police Department in California.

While wanted on a warrant for bigamy, Woods had fled with his 3-year-old daughter, who was in custody of her mother.  Yesterday (August 1, 2019), Buena Police Department officers located Woods' vehicle and he was taken into custody without incident. His 3-year-old daughter, whose identity is not being released, was found unharmed in the car. Buena Park Police investigators are currently working with law enforcement officials in St. Tammany Parish and with the Federal Marshals Office to reunite the child with her family.