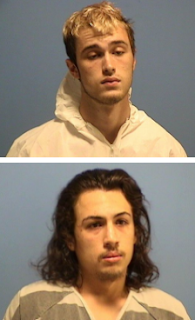 following a shooting that occurred at a residence on Diane Street off Transmitter Road in Lacombe Tuesday afternoon (July 23, 2019).

Occupants at the home told deputies two men showed up at the residence, banging on the front door, demanding money one of the men said he was owed.  The residence was occupied by five juveniles and one adult at the time. When the occupants of the residence would not give the men money, the men kicked open the front door and one fired a gun into the home. A bullet struck one of the juveniles. The men the fled the area in a gold/brown colored sedan.

The juvenile who was hit by the bullet was transported to a local hospital with non-life threatening injuries.