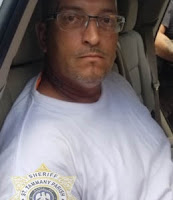 A Slidell-area woman contacted the St. Tammany Parish Sheriff’s Office Wednesday night (July 10, 2019) after she came home and reportedly found her husband, Glenn Mills, Jr. (41), actively involved in a sexual act with a 9-year-old girl that was left in his care.

When confronted by his wife, Mills fled the residence in his pickup truck prior to deputies’ arrival. The St. Tammany Parish Sheriff’s Office issued warrants for Mills’ arrest on the charges of First Degree Rape and Aggravated Crime Against Nature.

A St. Tammany Parish Sheriff’s deputy assigned to the U.S. Marshals Fugitive Task Force located Mills shortly before 1 p.m. Thursday afternoon at a residence off 2nd Avenue in Harvey, Louisiana. He was taken into custody without incident and booked into the Jefferson Parish Correctional Center as a fugitive out of St. Tammany Parish.