Upon arrival, the officers noticed a male standing on the porch with a dark object protruding from the front pocket of his trousers. Believing the object to possibly be the handle of a pistol, officers advised the man to move his hand away from the pocket area. When they removed the object from the pocket, it was discovered to be a rectangular shaped eyeglass case which contained clear plastic baggies of methamphetamine and a clear glass pipe with residue inside. Grant Davidson (36) was arrested and later booked on the charges of Possession With Intent to Distribute Schedule 1 Drugs (2 counts), Possession With Intent to Distribute Schedule II Drugs, and Possession of Drug Paraphernalia. 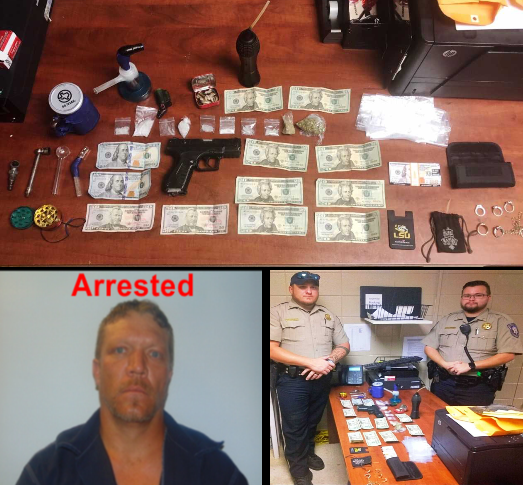 During a search of Davidson's pickup truck, officers discovered a dark brown powder substance which field tested to be heroin, along with additional clear plastic baggies which are commonly used to package narcotics. Deputies then searched the front porch where Davidson had been standing and discovered a quantity of marijuana, a smoking bong, an air pistol and a LSU credit card holder containing cash.

“We’re always on the lookout for illegal narcotics in our parish,” stated Sheriff Randy Seal. “Although this was not a normal drug operation, it produced good results and took even more illegal drugs out of our community. I congratulate Sgt. Blackwell and Deputy Tomberlin on a job well done.”